As an Armenian-American raised in the Lebanese culture, Fort Worth plastic surgeon Jon Kurkjian, MD is inherently familiar with the typical facial features and common aesthetic desires of individuals of Middle Eastern descent. Though everyone ultimately has their own, personal reasons for seeking treatment, some of the most popular goals of Middle Eastern rhinoplasty patients include:

It is important to reiterate that these are simply a few of the many reasons Middle Eastern patients pursue rhinoplasty. During a personal consultation, Dr. Kurkjian will have an extensive conversation with you regarding what specifically bothers you about your nose, and how you ideally wish for it to look. By employing VECTRA® 3D imaging, he will be able to digitally show you different modifications that can be made to your actual nose, providing him the ability to isolate what enhancements you truly like. In the end, this enables him to gain a comprehensive understanding of your unique desires while allowing you to visualize a realistic representation of your potential final results.

Regarding the actual treatment aspect of Middle Eastern rhinoplasty, Dr. Kurkjian will take several considerations into account, one of the most important of which is the skin. Generally speaking, Middle Eastern individuals have thicker skin, which will need to be addressed both surgically and non-surgically to help ensure an optimal outcome. This is because the skin covers all underlying bone and cartilage being altered with rhinoplasty, and if the skin is too thick, the improved definition and shape of the underlying nasal framework will not be visible. To combat this when necessary, Dr. Kurkjian utilizes certain surgical techniques to thin or “de-fat” the skin during the procedure, and he recommends medical grade skin care products to be used both before and after treatment to prepare the skin for surgery and maximize results.

In addition to skin thickness, another top consideration Dr. Kurkjian assesses is the strength of the nasal cartilage. Many women and men of Middle Eastern heritage have relatively weak cartilage, so every effort is made to strengthen cartilage as needed during surgery in order to maintain the newly created nasal shape long-term.

While the intricacies of each surgery are different, Dr. Kurkjian usually performs Middle Eastern rhinoplasty using an open approach, and compared to rhinoplasty for Caucasians and other ethnic groups, he is more likely to utilize a columellar strut or septal extension graft to help support the nasal tip. In the event a hyperdynamic nasal tip is being addressed, he will release the muscle responsible for animating the nose downwards. Great care is also taken to support the nostril rims so that an “operated-on” appearance is avoided as the nasal tip is defined.

Ultimately, while the end goal of Middle Eastern rhinoplasty is to adjust the nose to fit the face better (and improve nasal breathing, if needed), Dr. Kurkjian never wants surgery to be conspicuous—the result should always be a natural-looking nose that you could have perceivably been born with.

For specific information about recovery, cost, and more, please visit our main page devoted to rhinoplasty. If you have additional questions about Middle Eastern rhinoplasty, or if you wish to schedule a consultation with Dr. Kurkjian, please contact our office today. 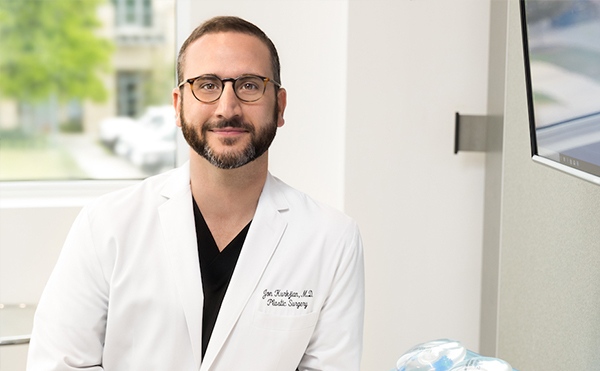